My kids and I did the Virginia Creeper Trail last weekend. It was absolutely fantastic. I cannot say enough how much fun and how gorgeous it was. This is despite the fact that we were completely drenched in a downpour. 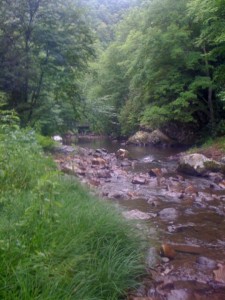 A note on logistics
I called and made a reservation for bikes and a shuttle the day before. We drove to Damascus, VA (a little over 2 hours from Blacksburg), getting to the bike shop about 30 minutes before the shuttle left. This gave us time to get the bikes, buy rain ponchos, go to the bathroom and get our act together. We could have brought our own bikes and just paid for the shuttle. You can also drop off your own bikes at the top and just one of you get a ride up while the others wait. Last, but not least, you can ride up the trail if you wish. It’s a very, very gentle slope, but it’s 15-17 miles to the top, so I imagine you’d have to be in pretty good shape.

Another option is to start and finish in Abingdon, which is 34 miles from Whitetop.

I didn’t realize until we got there, by the way, that there are a number of bike shops in Damascus. This is a good business for the town obviously. We rented at JC’s Outdoors and were happy with it, but the others looked fine too. Anyway, we all piled into the shuttle -about 12 people in all, with a trailer behind with the bikes on it-and were driven to the top of the trail. The ride up is on a very, very winding road and takes 20-30 minutes as I recall. Both kids were a bit queasy by the time we got there.

When we rode, the stretch from Whitetop to Green Cove was closed for repairs (funded by the ARRA by the way), so we started at Green Cove, meaning that the ride was 15 miles. It took 2 1/2 to 3 hours and to be honest we didn’t stop much.

The ride really was all downhill, but that’s not to say that it didn’t require any work. The slope is so gentle that you do have to pedal to keep going (the kids probably a bit more because they’re lighter, have less momentum and are on smaller bikes), and by the time we reached the end our hands were a little tired from braking and controlling the bikes. I saw a young (6-ish?) boy on the trail on a very small bike, and I would imagine that he would have been wiped out by the end (although the rain probably didn’t help). My daughters are 11 and 13 and were generally fine. 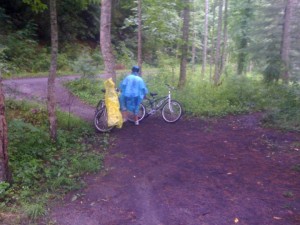 The default thing to do though is just gently pedal and freewheel down the trail. Check out the Youtube videos for a sense of what it’s like. Near the top especially, the trail is a little bit muddier and rockier. At the bottom, it was more tarmac as I recall (I preferred the top). Either way, do not wear clothes that you are fond of! You will get coal(?) dirt all over your clothes, especially if it rains. It’s probably a good idea to have a change of clothes waiting for you in your car at the bottom.

Most of the way the trail runs next to the river and you can stop and pull over in all kinds of places to relax, snack or just enjoy the water. There are numerous bridges that you cross. It’s just incredibly beautiful. There are places to camp if that’s your thing. About half-way down there are a couple of cafes/shops. We stopped at the first one we came to, which was more of small hut, although to be honest the one after that (across a small road bridge) looked like it had more going for it.

It started raining torrentially very soon into the ride when we did it, but the kids were great. They were having a lot of fun and continued to do so, despite being pretty soaked and filthy from the mud flung up by the bikes. They both had a real sense of accomplishment when we got to the bottom and my eldest wanted to turn around and do it again. I’m really proud of their attitude about the whole day. 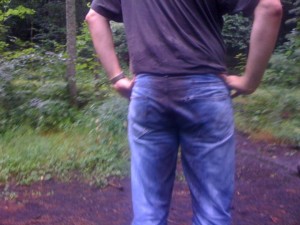 I’m looking forward to going back.