sotto voce: one of a series of long unfinished posts that I’m just throwing out there.

So, I completed my first (sprint) triathlon in June. A Roanoke Times news report is available for some while. 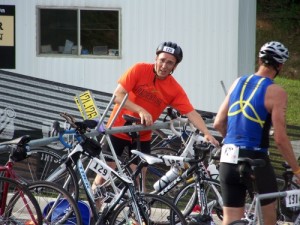 There are some pictures online, but I’m not going to link to them, mostly to spare you the sight of my astonishingly blanched farmer’s tan. I do have a picture of me in the bike-to-run transition, which is, I’m told, not bad.

Bearing in mind that this was immediately after falling and grazing my elbow quite badly, I’m doing okay.

It’s many months later, and post Lyme’s disease and appendicitis, I’m sure I’ve forgotten many of the little lessons I could have taken away from the experience. Let me think…

Nothing else springs to mind, but it was fun, and I’m glad I did it. In general terms, doing multiple sports does seem to lessen the risk of injury and develop more balanced fitness. I’m still biking, running and swimming, although I’ve no concrete plans for another race, and I’ve added a little bit more strength work recently through some body weight exercise. I think that’s helping. I’m trying out tracking with Fitocracy too.